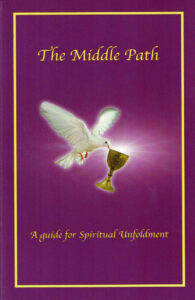 The teachings expressed here are timeless, reaching from ancient wisdom into the coming age, and they present a way that is neither to the left nor the right, that is, not entirely western or eastern, but universal and applicable to all. They point the way from the outer material world to that of the spirit.

We have called this book “The Middle Path” because it shows a way between two extremes. In the words of its author, called Father Paul by his students, “we do not lean either to the occult or the mystic side of things but we go through the core. It is what the old mystic called the bootstrap method; you pick yourself up by your own bootstraps. This is a bit tougher, but it is still shorter than going around and around the mountain.”

The teachings do not condemn other religious beliefs, but seek to present spiritual Truths which are essentially Christian but basically the same in all religions. Father Paul once said, “the teaching is not all in the words, the things that we tell you. It’s in what we manifest and live.” And again, “experience does not come in words.”

The Middle Path is available in both hard and soft bound editions. The Publisher’s discount price applies when purchased over the Internet.

Available from Science of Man